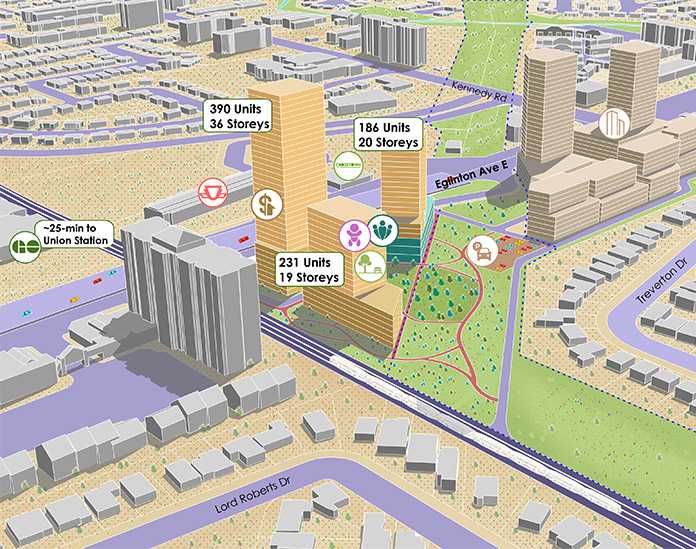 The following report is a pro-bono project by Smart Density as part of the HousingNowTO.com volunteer-collective. The purpose of this report is to provide a leading-vision of how to maximize the city-building and affordable-housing opportunities on the Kennedy station north parking lot site within the goals of the City of Toronto’s HousingNOW program.

A view to South-West

The site is comprised of a TTC commuter parking lot at the eastern portion, and a vacant auto-repair facility with its parking at the western portion. The TTC commuter parking lot contains 199 surface parking spaces and primarily services the Kennedy GO and subway station. The site is owned by CreateTO (formerly Build Toronto), an agency established by the City of Toronto to manage its portfolio of real estate assets.
In 2019, CreateTO launched the HousingNow initiative to support and incentivize the construction of new affordable rental housing within mixed-income and transit-friendly communities on City-owned lands. The initiative’s first phase saw development recommendation at 11 locations, and its recently announced second phase recommends the development of six additional City-owned properties, including the subject site.

The site is very well served by existing and future transit, as it is located directly across from the Kennedy Mobility Hub. The Hub includes the Kennedy Subway Station and Bus terminal and the Kennedy GO Station. In the future, it will also include the terminus station of phase 1 of the Eglinton LRT, which is currently under construction.
The GO train reaches Union Station from the Kennedy GO Station in 19 minutes; Metrolinx’s Regional Express Rail (RER) project will further improve the area’s access to the core by converting the existing GO service into frequent all-day, two-way service.
The high level of transit service enjoyed by the site strongly supports intensification.
Railway Safety
New development adjacent to railway properties is required to provide measures for protection in case of derailment. The Proximity Guidelines and Best Practices guide require a 30 m setback from a railway corridor to usable spaces, in combination with an earth berm or a crash wall. In Toronto, a 20 m setback from the railway to residential uses has been permitted in combination with a crash wall. Based on a precedent set in the OMB decision for 328 Dupont Street, the 20 m setback is required for any high-occupancy use and not only for residential uses.
Hydro Separation Requirements
The site is adjacent to a Hydro corridor. Hydro One requires that buildings are set back a minimum of 4.8 m horizontally from the outermost power line, but this separation distance is already fully accommodated within the corridor property and should have no impact on the development.
Easements
The site is subject to temporary easements by Metrolinx during the construction of the Crosstown LRT.

The site is designated Mixed-Use in the Official Plan Land Use map, supporting intense development. The properties to the east, south and west are similarly designated Mixed-Use. The properties north of the Hydro corridor are designated Neighbourhoods and will limit the height of development on the site due to requirements for providing transitions in height and scale towards them.
Eglinton Connects Planning Study
The Eglinton Connects Planning Study (2014) includes recommendations and implementation strategies to transform Eglinton Avenue into Toronto’s main East-West avenue.
For the Kennedy Mobility Hub, it encourages redevelopment to create an attractive, intense concentration of employment, housing, shopping and office space around the transit interchange.
During the public consultation, the majority of survey respondents indicated they were supportive of a mix of mid-rise and tall buildings in the Focus Areas, provided there is an appropriate transition to lower scale neighbourhoods. 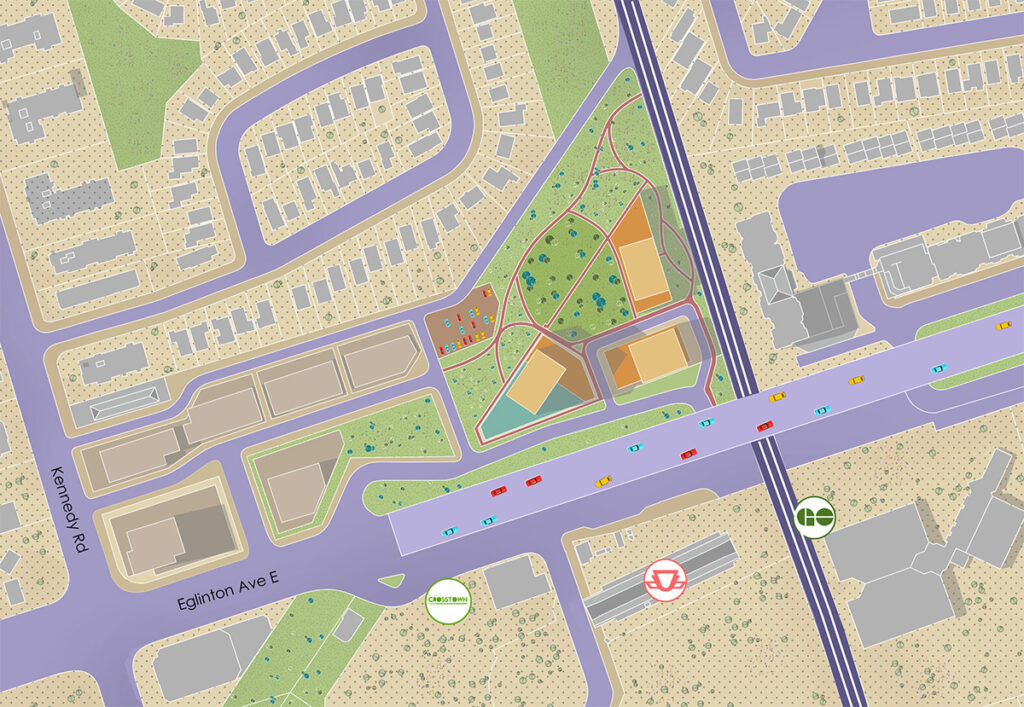 The Metrolinx Big Move Regional Transportation Plan (2008) identified some major transit stations as Mobility Hubs. Mobility Hubs are major transit stations and their surrounding areas, which will enjoy significant levels of planned transit service and, as a result, have high residential and employment development potential. Mobility Hubs generally contain the areas within approximately 800 m of the rapid transit station.
Metrolinx completed the Study for Kennedy Mobility Hub in 2014. The Study provides a vision for the TTC and Metrolinx lands; for other lands, the Study only provides guidance to the City for creating a future Secondary Plan and for reviewing development applications.

The Study divides the area into zones.

The subject site is located within the Primary Zone, which includes the area within about 250 m from the station, and it is where the highest intensity and greatest mix of uses are anticipated.

The Master Plan for the Kennedy Mobility Hub contains a few framework elements relevant to the site: 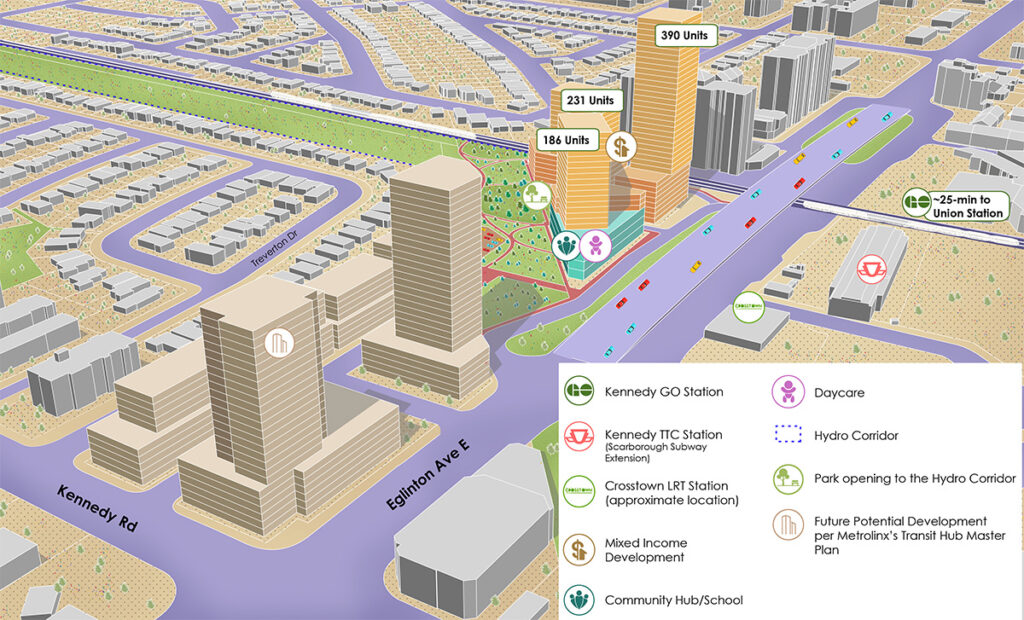