How is the RER Different from a Subway?

While the RER will provide frequent all-day service similar to the subway, the two are different and support different urban structures.

The general principle of a subway/metro is that the stations are within walking distance for most travellers (even though in Toronto the subway network is so sparse that many have to arrive at the stations by bus anyway). To stations that are within walking distance of most users, contemporary subway lines usually have stop spacing of about 1 km, and with such frequent stops the average speed is only about 40 km/hr.

This stopping pattern has two implications for urban planning. First, to justify the low speed caused by so many stops, each station has to serve many users, and this means at least medium residential densities within walking distance from the stations. Second, a subway cannot serve a large region by itself because travelling long distances would be very time-consuming.

Large cities that developed together with a subway system tend to have very large areas of medium or high densities; often the densities are consistent regardless of the distance from the subway stations since most of the area in this core is within walking distance from a station. Think about New York, London or Berlin. 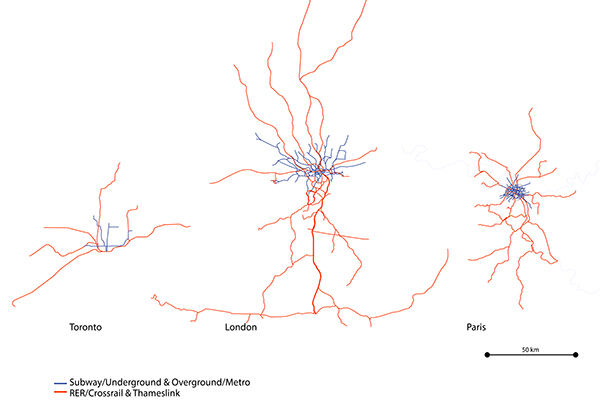 The Regional Express Rail is intended to serve the region and not only a dense core, and since it reuses existing rail lines and rail corridors, it can reach deep into the suburbs without a lot of new construction. But to serve areas far from the core effectively, it has to be very fast, and to be fast it must have fewer stations.

With one station every 5 km, which is typical for the outlying parts of the GTA, electric trains can achieve an average speed of 80-90 km/hr. This is much faster than a subway since the trains spend less time accelerating, decelerating and standing in the stations. This increased average speed substantially increases the reach of the transit system. If we take a 45-minute train trip as the reasonable upper limit for commuting, and ignore for now the travel time to the station, then for those travelling to the core the furthest they can live from their workplace is 30 km if they use a contemporary subway, but 60 km if they use the RER. With such speeds, the RER, unlike the subway, can effectively serve the expansive GTA.

How to Tie the RER Station to its Area?

With large distances between the stations, it is no longer possible for everyone to be within an easy walking distance to a station. Instead, the system has to rely on feeder transit to provide easy access. While surface transit tends to be slow – buses usually only travel at an average speed of 15-20 km/hr – this isn’t a big deal since people may only need to travel 2-3 km to get to the station.

With a frequent and reliable system of surface transit serving the train station, the station area becomes very accessible, and it can serve as a regional centre.

Part 3: How to Make the Most of the RER?

Part 4: How Not to Miss The RER Opportunity