How to deal with the excessive depth and of units and the lack of balconies?

One approach is to say that since there are willing buyers, there is no reason for intervention. We would normally accept such approach, however in this case there are two reasons why it is not so straightforward. First, the midrise building forms are the result of the very tight guidelines, and these guidelines create the problem directly – so we could as well change them to eliminate the problem.

Second, more broadly, all the new development in the city is tightly regulated or governed by various policies. The city has undertaken this role to protect the common interest, and good quality housing stock is definitely a common interest and should be a high priority.

If indeed we choose to solve the problem by changing the policies, there are two possible directions.

One direction is to add more restrictions: maintain the height restrictions, angular planes and setback requirement, and require that unit depths be limited (or similar measure).

Is that feasible? Probably not, but that is mostly because since the mid-rise guidelines already exit, they set expectations to the amount of density that is possible to build on a site. If the allowable density was lower, then except for sites that were bought recently, in most cases the change would only have impact on land owners; developers would (if the policy change is firm) price the land based on its’ slightly lower development potential.

The other approach is to be more permissive. Allow the same amount of density that can be achieved by following the guidelines, but be more permissive in the built form to achieve better conditions without (in my opinion) harm to the public realm.

Here is a demonstration of some design alternatives, first taking the restrictive approach and limiting the density to achieve minimum quality standards, and then with the more permissive approach which allows to build the same density but in a different form.

We will use two sample sites with typical to their contexts. The first is in a central area, an inner lot on a 20m right-of-way, the second less central, a corner lot on a 36m right-of-way.

This is typical to many mid-rise developments in the more central areas of Toronto:

Our reference design is the default: a design that maximizes density within the mid-rise guidelines, and is based on a few developments in the Toronto.

Now, let’s look at some alternatives that improve the interior layout. (To keep it simple, we will only change the residential part above ground floor.) 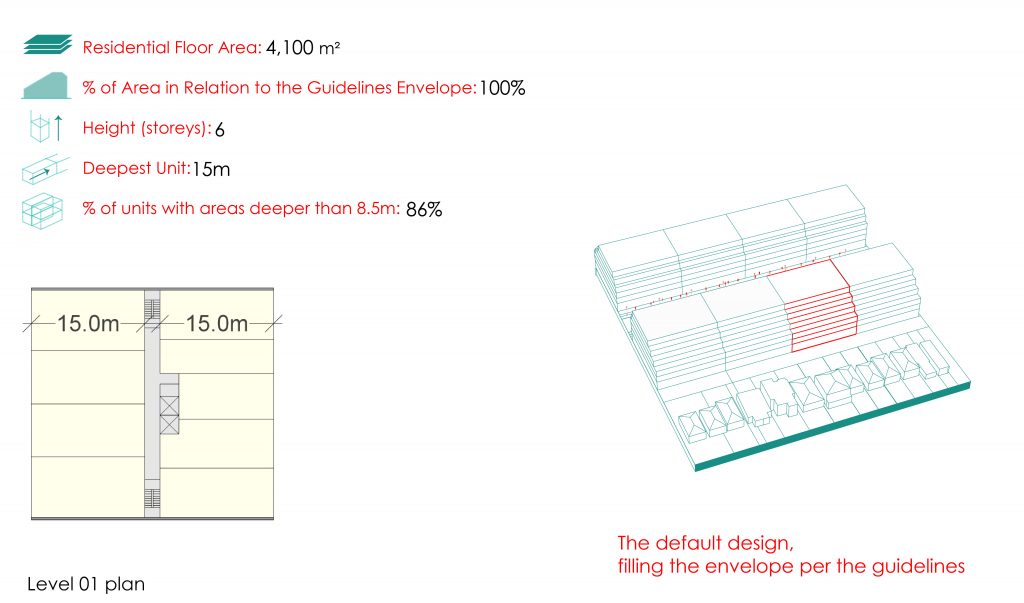 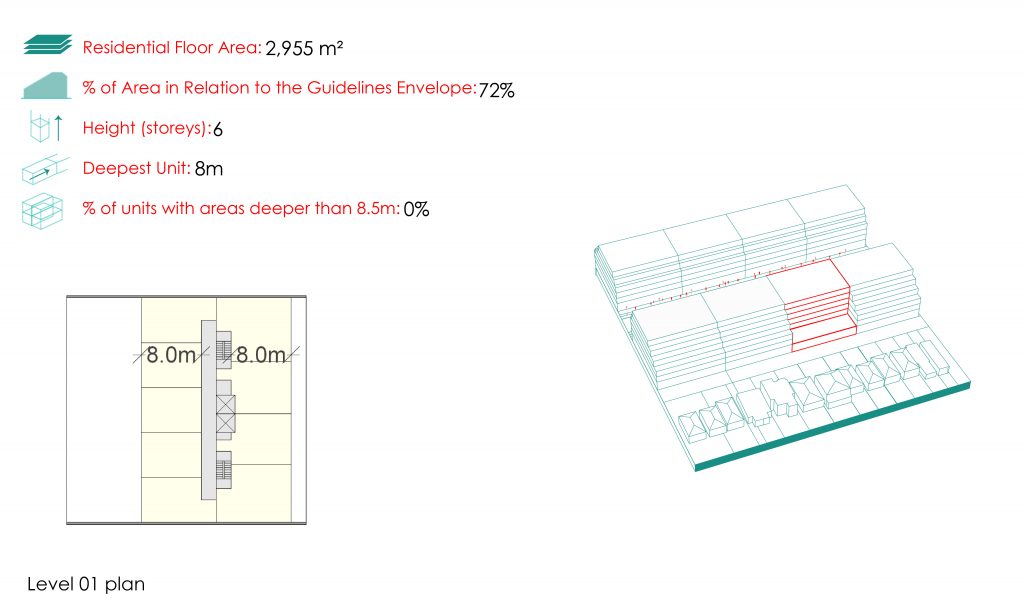 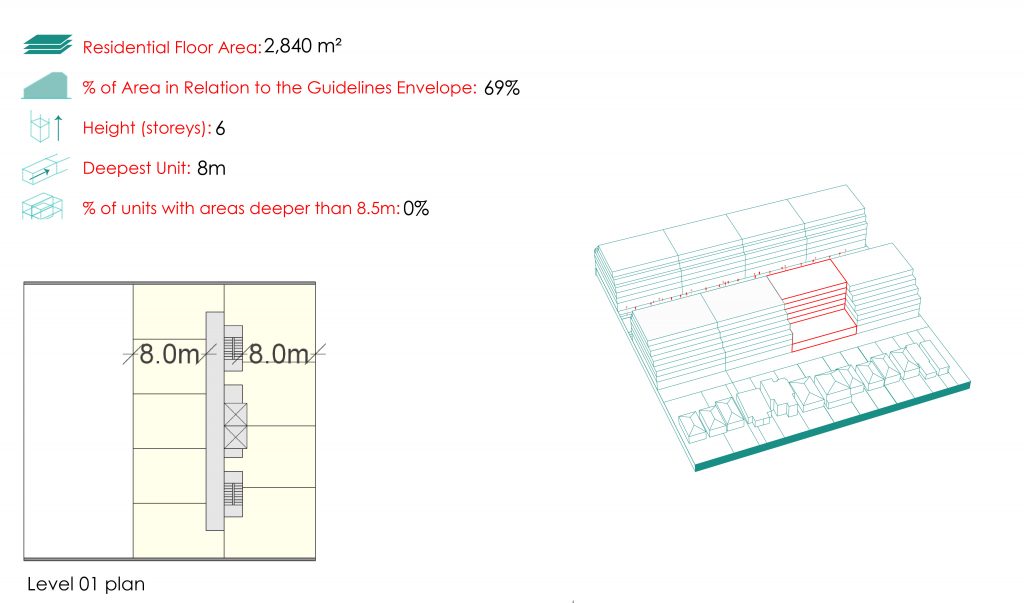 Those alternatives were all about keeping the building within the permitted envelope, and “carving out” mass to introduce light and air. Now let’s see some options that go out of the guidelines’ rules, but keep the same amount of area:

We see in these examples that a few alternative approaches are possible. If we are willing to reduce the residential area by 70%-80%, it is of course not a problem to achieve better units by taking out pieces of the building mass.

But even if we decide that it is important to maintain the full area that can be achieved with the existing guidelines, it is still possible to have designs with better interior layouts and that create a good urban environment (and generally satisfy the intentions of the mid-rise guidelines). By changing the mid-rise form to a form of a low podium and a modest tower, we create a street-wall in the first 3-4 storeys where it matters the most, and a slim “tower” that has only minor impact on the sunlight on the sidewalk, but provides better sky views – altogether the quality is maintained or improved. 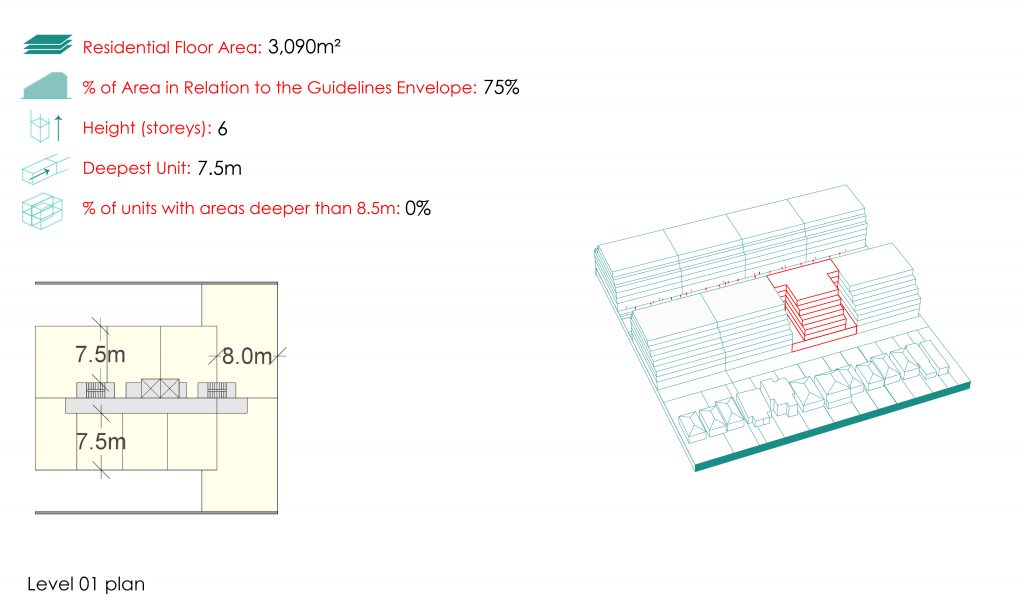 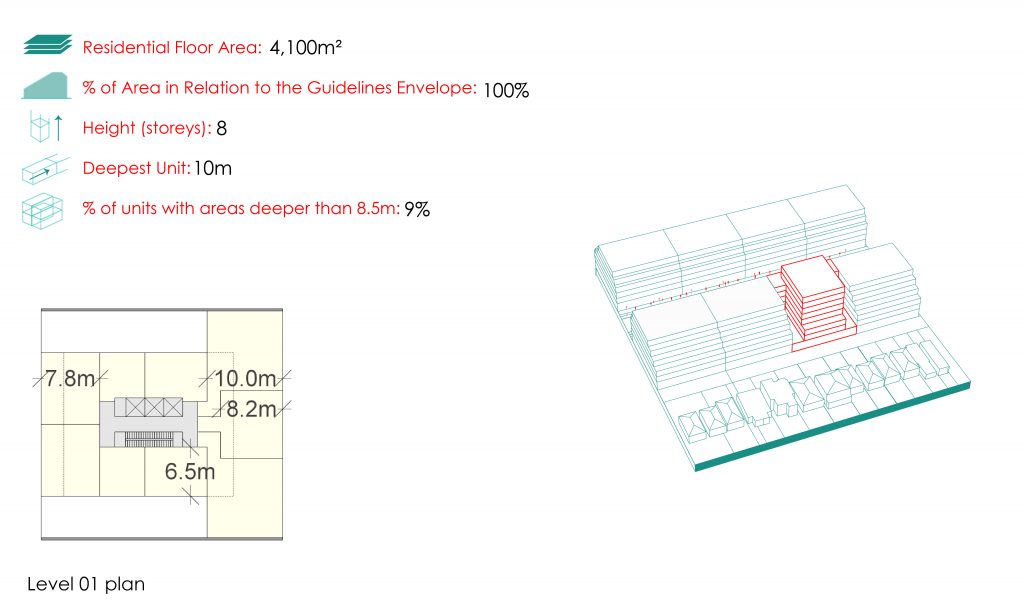 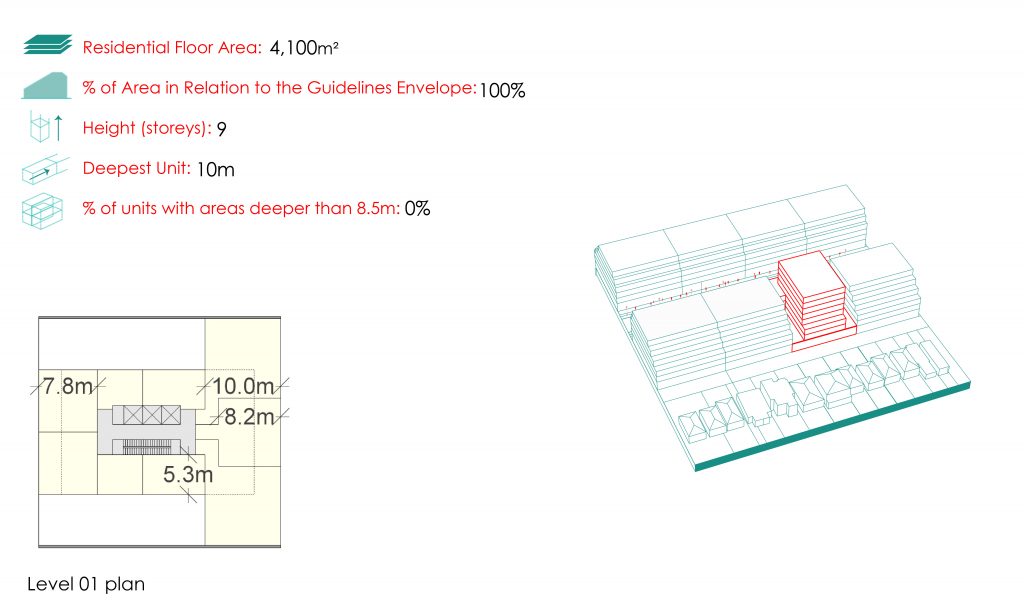 Overall, we think it’s good that the mid-rise guidelines started by looking at the impact on the street, but by doing so the city inadvertently incentivized developers to create (some) poor housing stock. And this is a very good reason to re-evaluate some of these guidelines. 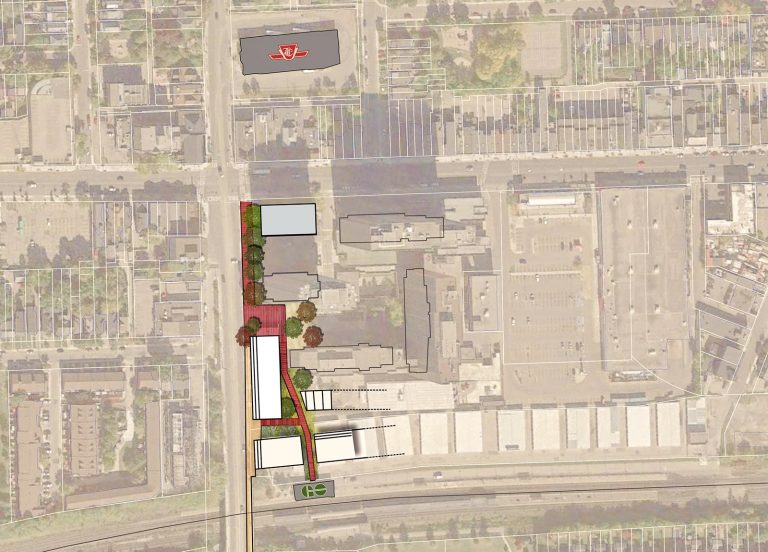